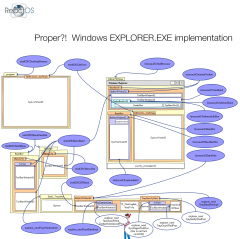 This makes it possible to switch between menus in the horizontal menubar, simply by moving the mouse to a new item. A dual hook system was implemented, where shell menus use a GetMessage hook, and system popups use a MessageFilter hook. Moving the mouse to a new item causes the old item to be cancelled, and the new item to be activated. Or that was the theory. Because of the complex flow of messages and method calls going between the different windows and classes, once a shell menu is open, moving to a system popup behaves wrongly. It seemed that all the failed attempts at fixing tracking bugs were always traced back to the same place: TBN_HOTITEMCHANGE.