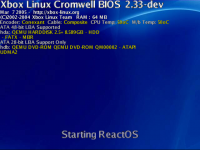 A modified Cromwell BIOS is required, which allows you to boot ReactOS or Linux. It's available in two forms: a flashable BIOS image and a standalone XBE file. The first one can be flashed into the BIOS (if you have a modchip, it works very well), and the second one can be started directly from the dashboard. It's fully free and can be downloaded below:

Installation from the Boot CD currently is not supported, however, there's an alternative install method which is fairly simple.

Note: you should have Cromwell BIOS flashed to the chip to use this boot method. It won't work with Xromwell XBE loader, and it will break your Xbox dashboard! Also note that hard disk should be formatted as FAT32, not BTRFS or any other file system.