ReactOS 32-bit ARM port was started by ReactOS Portable Systems Group back in 2008. Originally it was designed for ARMv5 and ARMv4, but these cores have an MMU that is incompatible with ReactOS/Windows multiprocessor requirements, and lacks instructions needed for synchronization done in user-mode, so currently the port targets ARMv7 compatible cores.

It should be possible to port to ARMv6 and possibly older ARM architecture revisions, but currently it's postponed and the system will be operable only in single-processor mode in these cases.

Since the GCC compiler has dropped the support for ARM PE executables, and the project had to upgrade GCC version, the port become unmaintained somewhere back in 2015 (see #Known facts section).

However in November 2018 Microsoft has added official ARM and ARM64 target support into Visual Studio 15.9, so now it is possible to bring the port back to life!

This is recommended build method. Please refer to these articles: 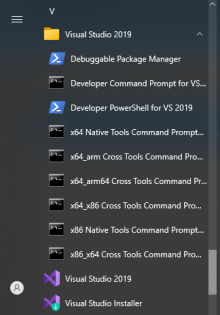 You will need latest RosBE and Visual Studio 2017 or 2019 installed. It would work with VS community edition as well.

The steps below are describing how to debug ReactOS applications built for ARM architecture on Windows platform. It's important to ensure our applications are running there without problems.

This build method has not been maintained for some years and may not work.

Obtain the React OS Build Environment for ARM (RosBE-ARM). The latest version is 1.0 and available from: https://download.reactos.org/reactos/RosBE-Windows/arm/1.0/RosBE-ARM-1.0.exe

Launch the RosBE-ARM command prompt, and type makex on the command line. After some minutes, you should have the whole tree built.

This is the general todo list with rough estimates in order to revive the ARM port.

These pages may be helpful to accomplish the tasks above:

Don't be in hurry and propose a Pull Request for the each fix you have done into the ReactOS repository. 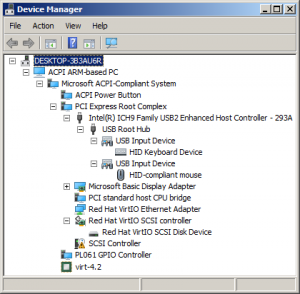 Use "virt" machine platform with UEFI firmware and ACPI tables. It consists mostly of synthetic VirtIO devices and can boot only from them.

You can see the ACPI device tree on the right, interpreted by device manager of Windows 10 ARM. Note that some minor unknown devices were removed from the screenshot. 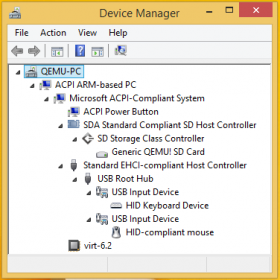 This one is an attempt to create a less synthetic platform, which would be able to boot Windows RT (both 8 and 8.1) without 3rd party drivers. It has only USB EHCI-compliant controller (for USB input and CD/DVD drive), SDA-compliant SD host controller (for the hard disk), and PL011 Serial UART (for debugging).

The platform does not expose PCI bus, because Windows RT does not support bus mapping properly. All devices are connected to the system bus and exposed via ACPI tables. QEMU VGA video is emulated, but it's only being passed as a linear framebuffer to the OS.

You can see the ACPI device tree on the right, interpreted by device manager of Windows RT 8.1. Note that some minor unknown devices were removed from the screenshot.

This section is about legacy testing method that was used in early times of ARM port. Click "Expand" to read further.

Development of ReactOS ARM port was started some years before the first public release of Windows on ARM (namely, Windows RT). At the time there were no standard ways of booting operating systems on ARM-based devices. One of possible ways was to follow Linux kernel boot process.

If you want to try reproducing the method documented in this section, you may encounter the following difficulties:

Currently, the ARM port will only boot from a RAM disk, either in NOR/NAND flash on a real device, or an emulated one like QEMU. A RAM disk is a simple flat image file that is loaded into memory.

To generate one of these images, you may use a tool such as qemu-img, the Mac OS Disk Image utility, or any other tool capable of generating a raw image file that corresponds to a hard disk image. You should generate a RAM disk of 32MB or less.

You then need a tool (on Windows), or the proper set of commands, to mount this virtual file/image as an actual hard drive on your machine. This step is required as the ARM port does not have an "installer" of any sorts, and cannot partition your disk, so you must do so yourself.

On a system such as Linux, you can use a local loopback mount, and then launch mkfs_fat on the mounted device. You can use either FAT16 or FAT32, as both have been tested with success. On OS X, the Disk Utility will automatically ask you to partition/format the image. Make sure you select "MS-DOS" partitioning when asked. On Windows, you may need to obtain a tool that can mount such images, such as vdkmount. Alternatively, you may use this image as an x86 ReactOS hard disk in QEMU, and then launch the x86 ReactOS setup program. Continue through the installer pages until you reach the formatting step, and allow ReactOS setup to format the disk. After that, you should be able to quit QEMU and have a formatted image file.

IMPORTANT: Usually, your raw image file will look like a real "disk". It will have an MBR sector at 0x00000000, followed by a boot sector for your first partition somewhere else on the disk. Sometimes this is at sector 63, 2, 1, 60, etc. You will need to know the offset of where the partition starts. Often this will be 0x7E00 (32256), although on Mac OS X .dmg images it will be 0x200. This offset is easy to find, either with a tool that understands your image file when mounting it, or by using a hex editor and locating the boot sector (look for "FAT").

Now that you have a mountable, formatted, FAT image file, go ahead and mount it, and set your ROS_INSTALL environment variable to the \reactos folder on the virtual drive. For example, if you mapped it to X:\, this would be ROS_INSTALL=X:\reactos.

Now issue a makex install from the RosBE command line. This will copy all the files to your new RAM disk.

The last thing you'll need is a freeldr.ini. You can write one from scratch, or simply take the usual one that the x86 ReactOS setup program installs on your x86 ReactOS partition/image file. You'll want to keep the ReactOS entry that's marked as "(RAMDisk)".

Now that you have a RAM disk, you are ready to build the final components. The ARM port basically uses an LLB (Low-Level Bootloader) to initialize the hardware, and then pass control to FreeLDR, the ReactOS Boot Loader. FreeLDR will then use the RAM disk to search for freeldr.ini, present the OS options, etc, and finally load the kernel.

Therefore, there are three components that the system needs: the LLB, the loader, and the RAM disk. QEMU has command-line options and support for only loading two image files, and so the LLB and the loader must be fused together into one binary file. Additionally, the RAM disk image file you created must be slightly modified for technical reasons beyond the scope of this document.

Thankfully, a tool exists to perform these operations: nandflash. You simply need to run nandflash (from your output-arm/tools/nandflash directory) with the "1" option to instruct it to generate the necessary files. The other use of nandflash (without the parameter) is to generate OMAP3 ROM NAND flash files, but that usage is beyond the scope of this document.

Note that nandflash expects your image file to have been called ramdisk.img, so make sure you rename it to match this. After running nandflash, you will have two new files: ramdisk.bin, which is a modified version of your ramdisk image, and reactos.bin, which is the fused LLB and loader together.

You can now instruct QEMU to boot ReactOS for ARM. You will need to obtain the ARM version of QEMU (qemu-system-arm) or build it yourself. Currently, testing is done with the "Versatile/PB" platform, but with a modified CPU target being the Cortex A8, an ARMv7-a core, which is being used internally for BeagleBoard and ZoomII-MDK work. To specify these two options, use -M versatilepb -cpu cortex-a8 on your command line.

You now need to specify the two files that nandflash created for you. You may do this with the following two options: -kernel reactos.bin -initrd ramdisk.bin.

Finally, you need to tell the LLB that we are booting from a RAM disk, and you need to input the boot sector offset we talked about earlier. You can do this with the following options: -append boot-device=RAMDISK,rdoffset=0x200. In general, -append is used to send command-line parameters to the LLB, and you can specify additional options by comma-separating them.

Here is an example final command line for QEMU:

Past this point, the experience should be familiar. Note that the only thing you can do for now is select the OS from the boot selection menu, and see it load a couple of drivers and hang somewhere in the kernel.