Unfortunately I can't figure out how to drag a picture in :p but other than that it seems to work quite well!
Top

Illen wrote: ↑
Thu Sep 05, 2019 5:39 pm
You need to load all the needed drivers at boot-time (change the Start value to 0 for each key in HKLM\CurrentControlSet\Services), since NT 4.0 has issues loading them from the ext2 volume. Also change their image path to "system32\drivers\driver_name.sys" (add the ImagePath entry if it doesn't exist), so FreeLDR doesn't fail to load these.

Still getting this error but I've done something wrong probably. Thank you for answer anyway.
Top

GPU acceleration became working on my real hardware with replaced Win32 subsystem (gdi32.dll, imm32.dll, user32.dll, win32k.sys and winsrv.dll), DirectX API/Graphics drivers (dxapi.sys, dxg.sys and dxgthk.sys) from Win2k3 and full MS DirectX installed (Feb & June 2010, they are avaliable in Rapps)! Without replacing, it doesn't work.
It seems to me that ideally such replacing may "fix" GPU acceleration on all video cards supported by ReactOS (if the driver installs successfully and the system boots with him into desktop). I think I can write a tutorial also, how to do it. 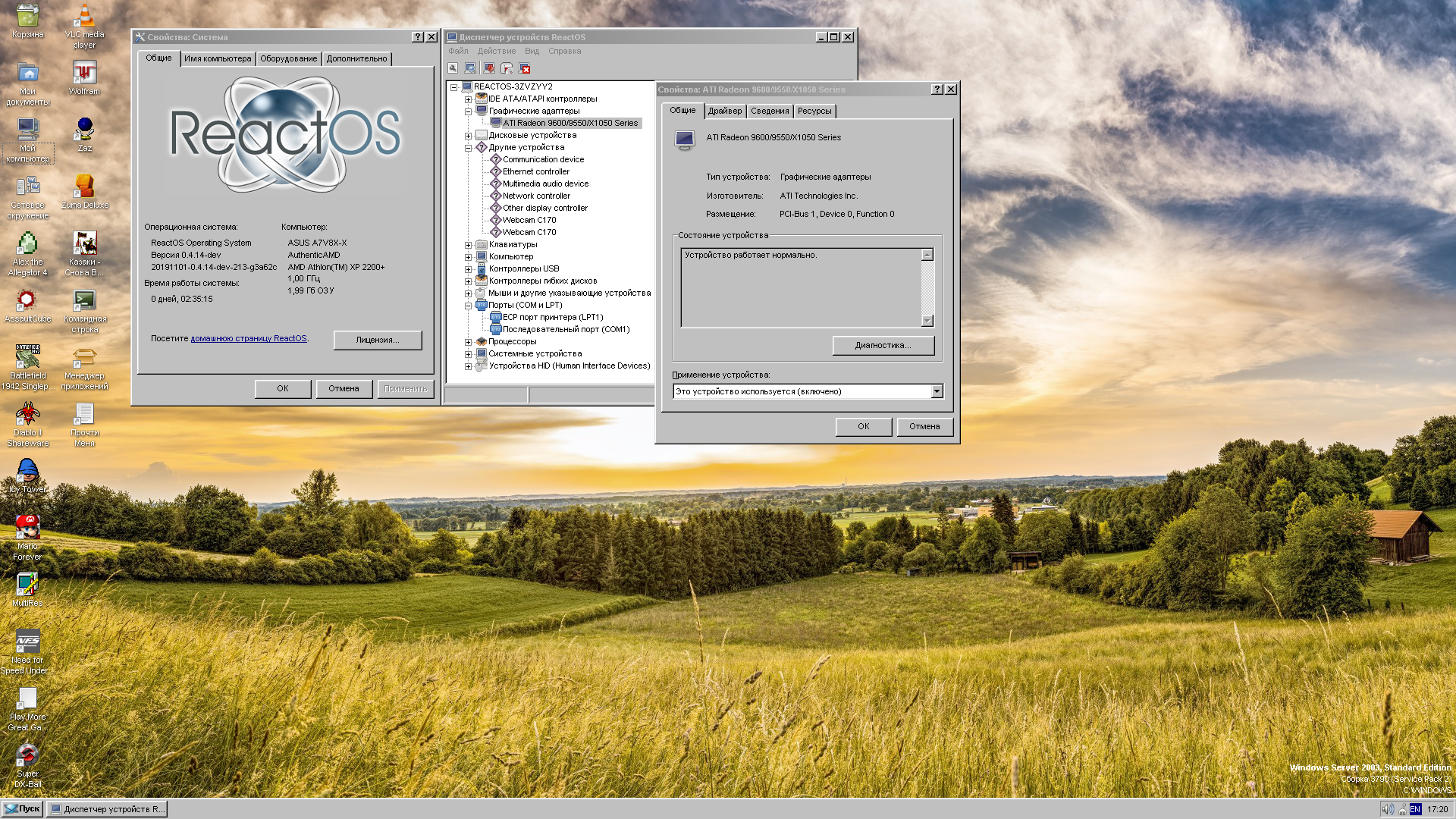 Configuration of my test PC:

It works with ati2vtag renderer (from the video card driver), even without Mesa3D.
Some games work even better than with our (Wine's) DirectX in VirtualBox.

AGP texture accelaration;
OpenGL acceleration (so all OpenGL games doesn't work);
the system not shutdowning properly. For the succesfull shutdown or reboot, you need to press poweroff button on your PC, then wait some time, when desktop will become not clickable, press reboot button, and after this, you can finally turn off the computer, or boot again. However, registry settings save successfully after such "shutdown".

P.S.: Please note that you need to build ReactOS manually with disabled debugging for csrss. For doing this, comment out the following line before building: https://git.reactos.org/?p=reactos.git; ... b=HEAD#l18 Otherwise, the system will not able to boot into desktop with Win32 subsystem files replaced.
Top

hi to all,
I have installed Ros in virtual machine and I nave installed Visual Foxpro 9 developing language.
the application seems to work properly.
Also an .exe compiled with vfp9 is working great.
this is really an epic win!!

It was always an improvement on the basic task manager giving additional useful information such as the current highest resource user when hovering over the performance chart for CPU, memory or disk i/o. 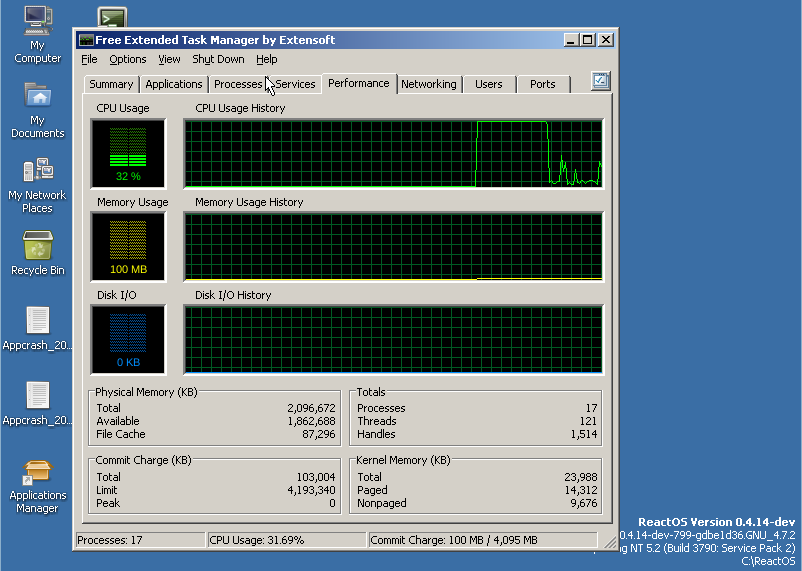 It installs and operates flawlessly on ReactOS in seemingly all respects other than that of transparency. 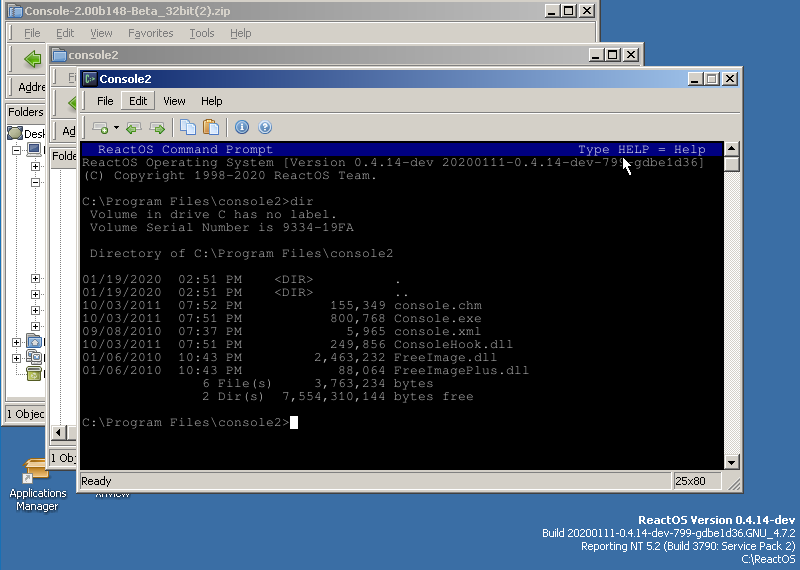 Installs and runs almost flawlessly. There are some on screen artefacts and transparency causes a problem on the image map but other than that the program functions and is usable. 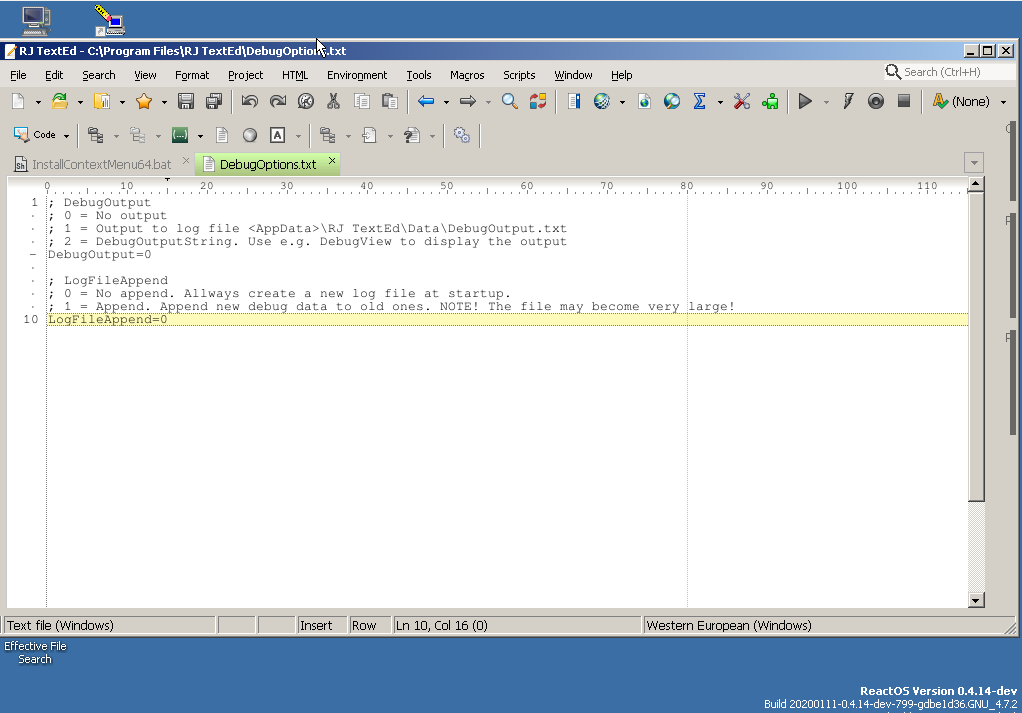 This is truly an Epic Win for me...

Back in the 1990s I wrote my first big software project. I wrote it in VB6 to familiarise myself with one of the languages being used by the programmers that I worked with (I was the Project Manager for a few projects at that time). I had previously started it Quickbasic 4.5 and then migrated it to VBDOS and then finally to VB for Win up to VB6. The task turned out to be a big one and I never completed it because Microsoft made VB6 obsolete and due to changes in the language, migration to .NET more or less impossible. So I gave up.

I have just taken the single completed component of my software, the first of three modules (the second almost complete, the third requiring a re-write) and I have copied the first modules files to ReactOS.

It is a database of all military vehicles and equipment used by the Allies and Axis forces in NorthWest Europe in 1944-45. The data was compiled before the internet was available all from original handbooks, documents &c and brought together in a flatfile database of my own making. All the tools to build the db were made by me and I knew nothing about proper programming. 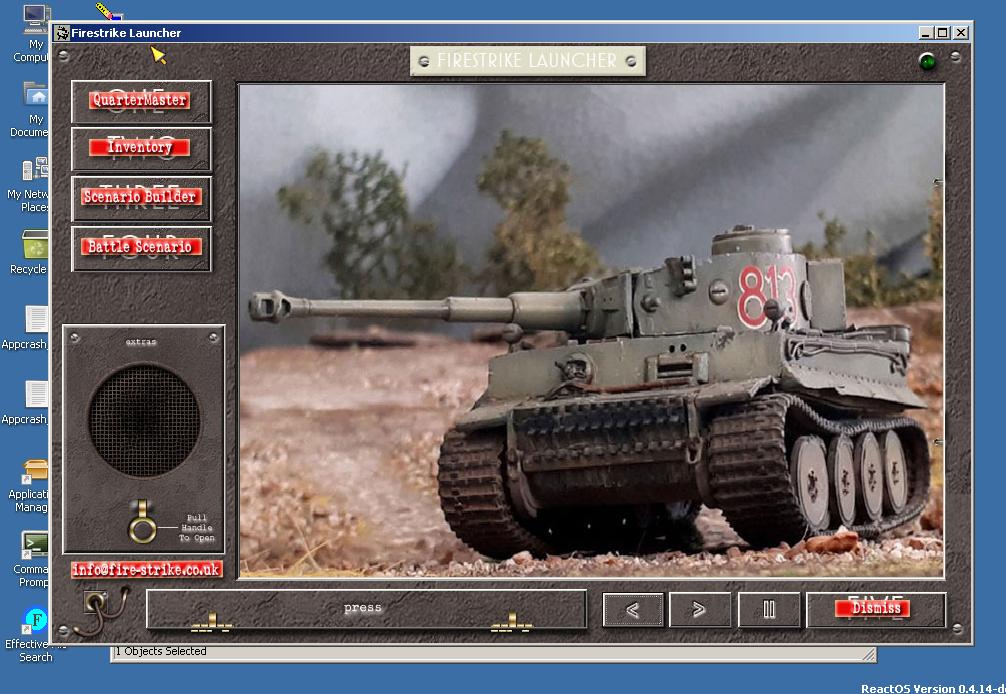 I have just run the program under ReactOS and it worked first time, NO ERRORS AT ALL. 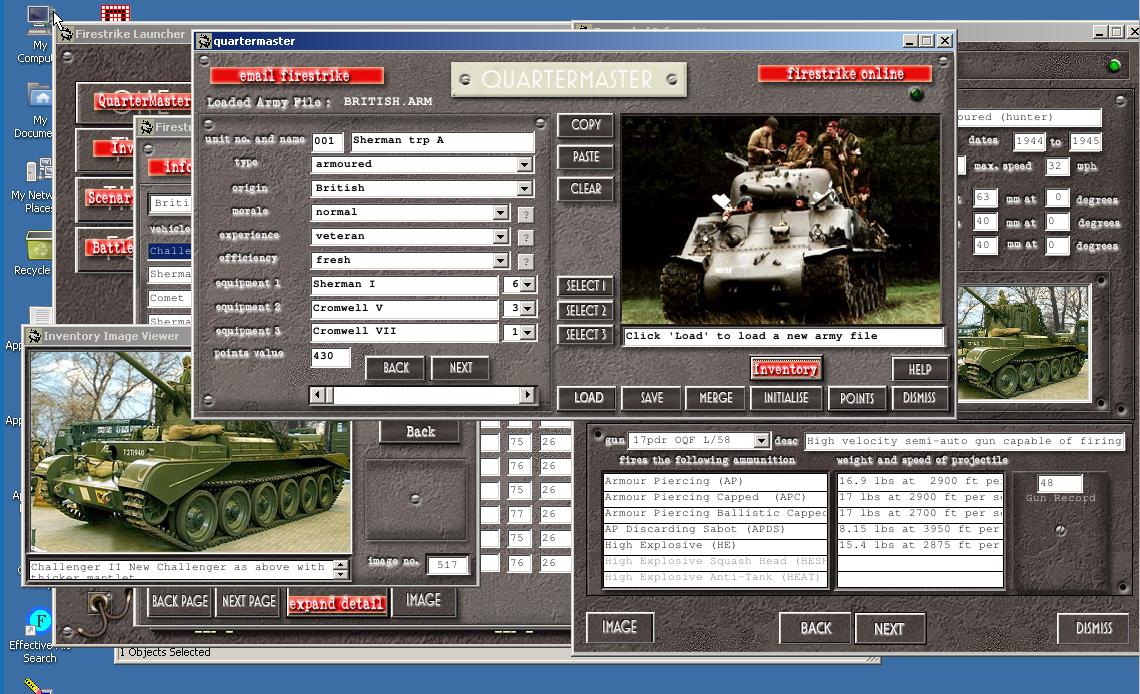 I gave up because MS has deprecated the programming environment and the o/s was no longer a friendly place for VB6 programming and the task to complete was so huge. With the optimism I have from seeing it run under ReactOS I might now have to restart my old project and complete it! Time to try to get that VB6 IDE working on ReactOS. Next test - VB6!
Skillset: VMS sysadmin 20 years, fault Tolerance, cluster, Vax, Alpha, ftSparc. DCL, QB45, VB6, NET, PHP, JS, CMS, Graphics, Project Manager, DOS, Windows admin from 1985. Quad Electronics. Classic cars & motorbikes. Artist watercolours. Historian.
Top

Here's some stuff I tried on ReactOS x64 build: