I can't believe week seven has already passed! Adding assigned clusters to data runs turned out to be more challenging than I anticipated, but I made steady progress on it throughout the week and have it working now (as far as I can tell). Fixing the problems with LargeMcb.c in week 1 came full-circle, as I relied on a map control block to simplify my task considerably.

I also fixed a couple of issues in the read functionality of the driver, both of which got in my way at one point or another. One was a genuine bug that would cause data to not be read from a file in certain instances. The other only came up if a file was corrupted, but it would often result in a BSOD when that happened. It's always nice to make improvements that contribute to the driver working more reliably. After all, it can't stay experimental forever!

One decision I made early on in the week was to write a function that would dump the data runs in both binary and interpreted form. The output looks like this:

This shows a file with two fragments and 16 clusters assigned to it. This function didn't take long to write at all and I'm really glad I did this early on as it allowed me to quickly identify multiple bugs that came up during development.

The most difficult-to-find bug involved one or two bytes near the end of a data run getting corrupted once the data run was long enough. I found the bug by calling my NtfsDumpDataRuns() function after any line that referenced the memory of either the file record or the attribute.

I did freak out a little bit near the end of the week when I thought everything was working, but instead saw a familiar message after updating a file with notepad in ReactOS: 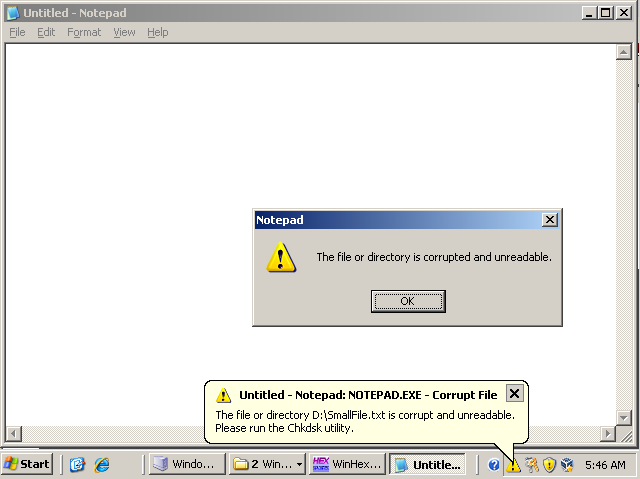 I should be used to this by now: after I have a feature working in ROS, it needs to be debugged for Windows. It must be so much easier to make an operating system from the ground-up! This turned out to be a pretty simple error, caused by not updating the data runs when truncating a file. It was easy to fix, and now I'm back in business! :)

There's a few lingering issues that need to be addressed related to updating a file's size, and I hope to fix all of the major ones during week 8. Then I need to shift gears and start focusing on creating new files! Finally! Have I mentioned in this blog how that's not a trivial thing to implement with NTFS? I guess I should talk about why that is in a future blog post...